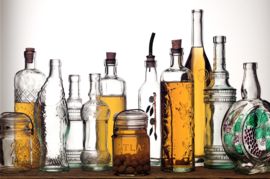 Verjus or verjuice.   The word verjus derives from the French term vert jus, literally “green juice,” which refers to its source—the high-acid, low-sugar grapes that winemakers thin from the vines just when the crop is beginning to ripen. This early crop of unripe grapes is pressed, resulting in verjus.  While acidic, verjus has a gentler flavor than vinegar, with a sweet-tart taste that is often used to heighten the flavor of many sauces or mustards.  Unlike wine, however, verjus is not fermented, and is not alcoholic, meaning that its use in a salad dressing or sauce will not interfere with the flavor of the accompanying drinking wine.

It’s fairly new to the American culinary scene, but cooks in Europe and Middle East have been using it for centuries, to tenderize meats and as a remedy for a variety of ailments, including upset stomach, according to texts on early Roman cookery.  (Verjus is cited in what is considered the first printed cookbook in Europe, Platina’s De honesta voluptate et valetudine, dated around 1465.)

It can be red or white.  Red verjus has an earthier flavor, while white verjus has a crisper taste.   Red verjus, which is bolder than the white, pairs well with meats and sauces in which you would use red wine or red-wine vinegar.  White verjus which is a bit more delicate is lovely in a simple vinaigrette dressing, it enlivens rich sauces for fish and chicken.   Using verjus for deglazing pans can make some amazing sauces……add in some fresh herbs and voila…..dinner!

Exploring with this wonderful juice is a must.  Starting out with just a few teaspoons and adding more by taste is the best way to experiment in your recipes.  Finding the right balance is key.

Verjus is available right out our back doors in the Sacramento Valley Region. Napa Valley Verjus is made from some of the best Cabernet and Merlot vineyards in Rutherford and St. Helena from such growers as Laurie Wood, David Abreu and Chuck Wagner. Napa Valley Verjus has been processed at Caymus Vineyards, Monticello Cellars, Robert Pecota Winery, Charles Krug Winery, and Napa Wine Company.  Look in your local gourmet food stores and see if you can locate Verjus.

Both red and white verjus can be used in salad dressing, with a proportion of 3 parts verjus to 1 part oil; red verjus is better suited for strong-flavored greens like arugula, while white verjus is better for tender greens, like butter lettuce. You can use red verjus as you would use red wine vinegar or red wine—it is particularly good in sauces for meat or spicy foods, as well as marinating. You can use white verjus as you would use white wine vinegar, lemon juice, or white wine—it is good in beurre blanc, or other sauces for chicken or fish.

Verjus bottles are sealed with a cork; remove it gently so that it can reseal the bottle. Once opened, store verjus in the refrigerator, where it will keep for a month or two. For longer storage, pour it into ice-cube trays and freeze