What’s Up with Heirloom Produce? 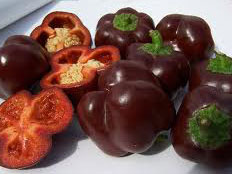 No, I’m not going crazy, I’m talking about heirloom produce. I’m sure that you’ve heard of heirloom tomatoes, but what does the ‘heirloom’ prefix mean? An heirloom plant or vegetable is a crop that was commonly grown during earlier periods in history, but is not used in “modern large scale agriculture.”

More and more Farmer’s Markets are offering Heirloom produce. The heirloom seed market is growing rapidly as well. Many website offer a large variety of seeds for you to “grow your own” heirloom produce. Everything from black corn, chocolate colored sweet peppers and Merlot lettuce. (yes it’s deep wine colored!) One specific heirloom variety watermelon is a cucamelon. It is a light green fruit whose flesh is white, crisp and crunchy with a lemony tartness. The flavor is similar to a cucumber. People chop them up into summer salads or add them to a simple salsa. I personally eat them like pretzels or chips! Just add a tiny salt and pop them in your mouth! Delicious.

Food should be fun, interesting and enjoyable. Adding color, shapes and new varieties of produce is a simple, easy and great way to develop your palate and knowledge of food!  Why bother with heirloom vegetables? Well, first of all, they’re something different. Who expects a blue pumpkin or a yellow tomato? Second, the taste. You might be surprised by how much more flavorful an heirloom vegetable is when compared to one of its modern equivalents. Third, most respond very well to organic treatment. This isn’t surprising, since most were developed long before chemical agriculture became the norm! Fourth, it maintains biodiversity. You never know when we’ll need those genes carried by heirloom produce.

Some heirloom veggies may seem quite odd by modern standards. We get so wrapped up in our expectations of what a certain type of vegetable should look like that we tend to forget that it took a while to breed our modern food plants to the standards that we now enjoy. For example, did you know that some heirloom cultivars of pumpkins are red, white, and even blue, rather than the standard orange? Similarly, carrots can be red, white, or black, and round instead of cylindrical. While a few unusual versions of both vegetables have made it into the modern seed catalog, they’re rare.

What about a simple, delicious and easy heirloom carrot recipe?

***Try and find some different sizes, color and shapes of the carrots for extra flair!

2. Place pan in oven and toast, stirring occasionally, for about 15 minutes, or until carrots are tender.

3. Remove from oven and drizzle over honey. Toss to coat. Season with additional salt and pepper, if necessary.

Want to eat healthy and look like a professional chef while serving “heirloom” produce?! Try:

1. Preheat the oven to 425°. Brush a large oval baking dish with 1 tablespoon of olive oil. Arrange the tomato and eggplant slices in a single layer of overlapping concentric circles. Scatter the thyme sprigs on top and season with salt and pepper. Drizzle the remaining 3 tablespoons of olive oil over the top. Cover with foil and bake for about 30 minutes, or until the eggplant is barely tender and the tomatoes have exuded their juices.
2. Uncover the gratin and bake for about 25 minutes longer, or until the juices have evaporated and the vegetables are very tender. Sprinkle the goat cheese on top and bake for about 10 minutes, or until lightly browned. Serve warm or at room temperature.

I suggest your next trip to the Farmer’s Market you should ask the vendors if they have any delicious recipes or “new’ heirloom produce for you to try!